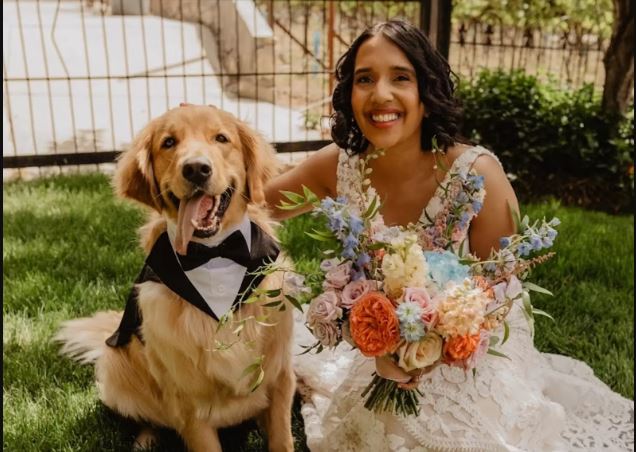 As Tanvi Gangadhar and Sumanth Gudaparthi planned their wedding, they knew they wanted their beloved 2-year-old golden retriever, Chai, to be involved.

They made him the ring bearer, and even bought him his own tuxedo for the occasion.

Chai is a pandemic puppy and he often gets nervous being around big groups of people. Knowing this, Gangadhar made sure he had his favorite tennis ball nearby all day as a source of comfort.

However, what Gangadhar didn’t realize was that this tennis ball would eventually end up in her veil.

“Chai played with his ball the entire time; we even stopped for a bit in the middle of the vows because he dropped his ball down the stairs,” Gangadhar told The Dodo. “Once the officiant announced us as husband and wife, everyone cheered, and Chai got excited and nervous and took cover under my veil and dropped the ball, which led to the adorable moment.”

Of course, there were no hard feelings.

“We were very happy that he was having fun, and that’s all that mattered,” Gangadhar said. “Our friends love him too, so the guests cheered him on when he found the ball.”

You can watch Chai dropping the ball in the middle of his parents’ nuptials here:

Years ago, Gudaparthi was skeptical about getting a dog, but now she and her husband can’t imagine life without Chai.

“We think he was meant to be adopted by a South Indian family because he loves [dog friendly] curd rice, dosa and idli the most,” Gangadhar said. “He was a perfect fit.”

Gudaparthi and Gangadhar are set on making sure Chai gets everything he deserves — and Chai gives them lots of love in return.

“We work hard to give Chai the best life,” Gangadhar said. “We even moved into a bigger house with a backyard so that he has ample space to run around.”