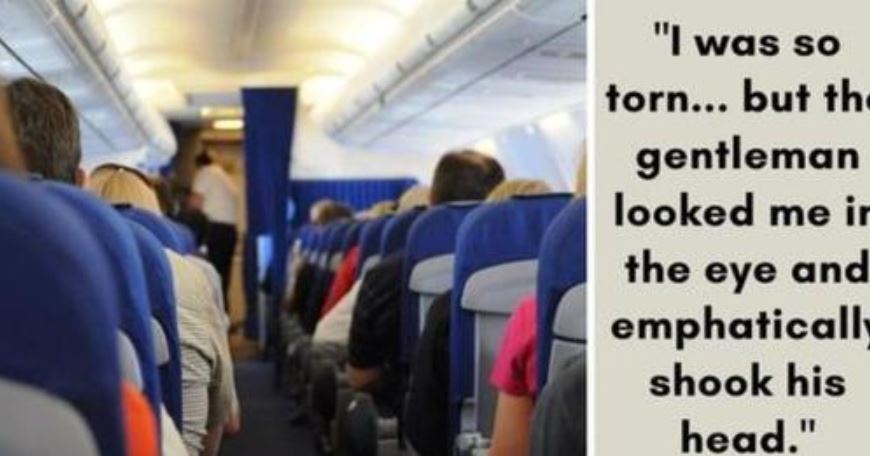 She shared in Twitter, where she goes by the handle @Unigwechidalu, the events that made her question her own kindness and how ready other people are in taking advantage of said kindness.

She was on a flight to Dubai when she met an elderly woman. At first, the older woman asked for help in putting her luggage in the overhead compartment.

Before she could do anything, however, a gentleman sitting across assisted the woman instead.

Or at least, that’s how @Unigwechidalu described the woman when she settled beside her.

She shared that the woman was well-spoken that they managed to chat through the entire flight to Dubai.

Then, when the pilot announced that they were beginning their descent in preparation for landing in Dubai, the woman suddenly developed stomach pains.

Thinking it was an emergency, she pressed the steward’s call button for assistance. Then, she explained that the woman was not feeling well.

At this point, things took a strange turn because the woman started calling her “my daughter”.

The episode escalated into an emergency.
The stewardess told them that there was nothing they could do except give her painkillers.

Meanwhile, the pilot announced that they have a medical emergency and advised everyone to stay calm.

The old woman was crying and sweating.
All the while, she was not letting go of @Unigwechidalu hand.

With how the older woman was acting, the other passengers assumed that they knew each other. The plane landed in Dubai without further concern.

The gentleman who placed the older woman’s bag in the overhead compartment removed the bag so @Unigwechidalu wouldn’t have to.

But as he lifted the luggage out of the compartment, he left her with a stern warning – she should distance herself from the lady and make it clear that they are not traveling together.

So when the cabin crew approached her and asked if they were related, she explained that they met on the plane.

Just when she thought it was over, the man passed a note to her.

The note said that she should let the cabin crew handle the old lady. Following the man’s advice, she left the old woman to the crew even though she felt guilty.

While she was waiting for her luggage, a commotion broke out.

She watched as the elderly woman run away from the cabin crew. She even got out of the wheelchair that was given to her for assistance.

This didn’t last long, however, and the woman was caught by airport security.

When she saw @Unigwechidalu, she called out.
“My daughter! How could you do this to me!” she quoted the old woman in her tweet.

That’s when she realized that the old woman was carrying drugs in her luggage and was trying to do something sinister.
Fortunately, the man who warned her came forward to clear her name when she insisted that she just met the old woman on the plane.

To confirm her story, airport officials took their passports and asked the older lady to tell them the name of “her daughter”.

The Nigerian passenger never gave her name.
As things were being sorted out, airport officials gave her an important piece of advice.

After dusting the luggage for fingerprints, the officials released her and told her never to touch anyone’s luggage either in flight or at the airport.

“Your luggage, your problem”.
And if anyone asks for her help, she said they could ask the flight crews instead.