Loving Grandson Longing for His Lonely 77-Year-Old Granny Walks 1,700 Miles to Hug Her 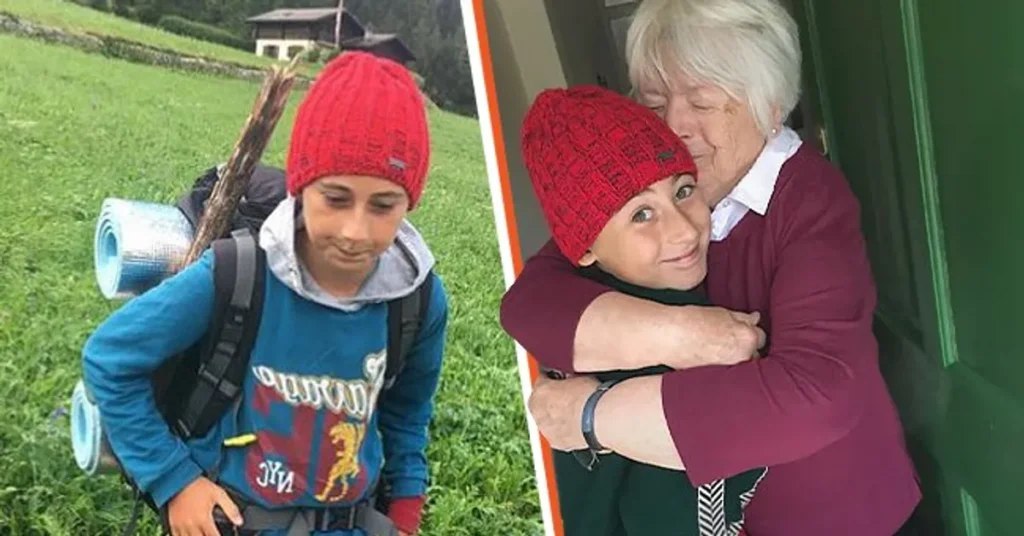 A sweet kid received widespread praise after his touching story went viral. The little man walked 1,700 miles to give his beloved grandmother the warmest hug. Here’s how the story unfolded.

The COVID-19 pandemic put a bridge between several families across the world. However, due to the need to maintain social distance and keep the virus from spreading, essential services like flights and other means of transportation were put on hold.

One of the families affected by the lockdown was Romeo Cox’s. Due to travel restrictions, the then 11-year-old had sorely missed his grandmother, but there were no flights to visit her in her Witney, Oxfordshire home.

The little man could not help but think about his old granny, who was locked down alone in London while he was in Palermo, Sicily. So Romeo gave his grandma a call one day in June 2020, informing her of his decision to travel down to London to see her.

His grandmother, Rosemary, figured the young man was blabbing and paid no real attention to his call. It had already been more than a year since Romeo last saw his beloved grandmother.

Romeo drew up a plan to visit his grandmother and, at the same time, “save the planet.” The little man decided to do things the old-fashioned way and plot his way to London.

He drew a map and decided to walk and take boats where necessary. Finally, Romeo beckoned on his dad, Phil Cox, a war journalist, to accompany him on the great trip to grandma.

The brave Romeo walked through Italy, Switzerland, and France to London. However, the trip was not without its challenges. The father-son team had to fend off dogs and risk the harsh weather to make it to Rosemary.

The journey was a thrilling adventure for the young schoolboy. In an interview with the BBC, Romeo opened up about his unique experience and the support he received from concerned people, including refugees.

Phil and his son had to cope with a stubborn donkey, which they had to drag mildly, and when they could not afford to stay in hostels, the adventurous duo had to find comfort under trees in the open. Speaking of the donkey, he said:

“On the third day and the fourth day … we were eight hours straight every day trying to pull it, but we didn’t want to hurt it.”

Sometimes, they were lucky enough to get hostels or families to give them places to sleep. Also, Romeo and his father did not make the entire journey on foot. Instead, their trip was a mixture of bold rides, cycling, and footwalks.

Sadly, Romeo and his dad, Phil, could not immediately give Rosemary the hug they dreamed of when they arrived in London. Instead, they had to be quarantined for another two weeks before making the final trip to grandma’s house.

On getting close to his grandma’s house, footage from the moment showed the sweet Romeo running happily into her open arms. Beaming with a smile, Rosemary couldn’t have been happier to have such a brave little grandson.

The duo shared the warmest hug ever, and afterward, Rosemary went on to give her grandson eggs and toast. The duo had a lot to talk about, especially Romeo’s lifetime adventure.

Romeo experienced several touching moments during his trip and made some great friends. One of his biggest discoveries was refugees.

He made friends with Randolph, a refugee from Ghana who went out of his way to help the traveling team. Afterward, Romeo thought of a way to pay back the trust and kindness he received from Randolph and the refugee camp.

The boy raised £13,731 for the Refugee Education Across Conflicts Trust charity. Several social media platforms praised the brave schoolboy for his kind heart and love.