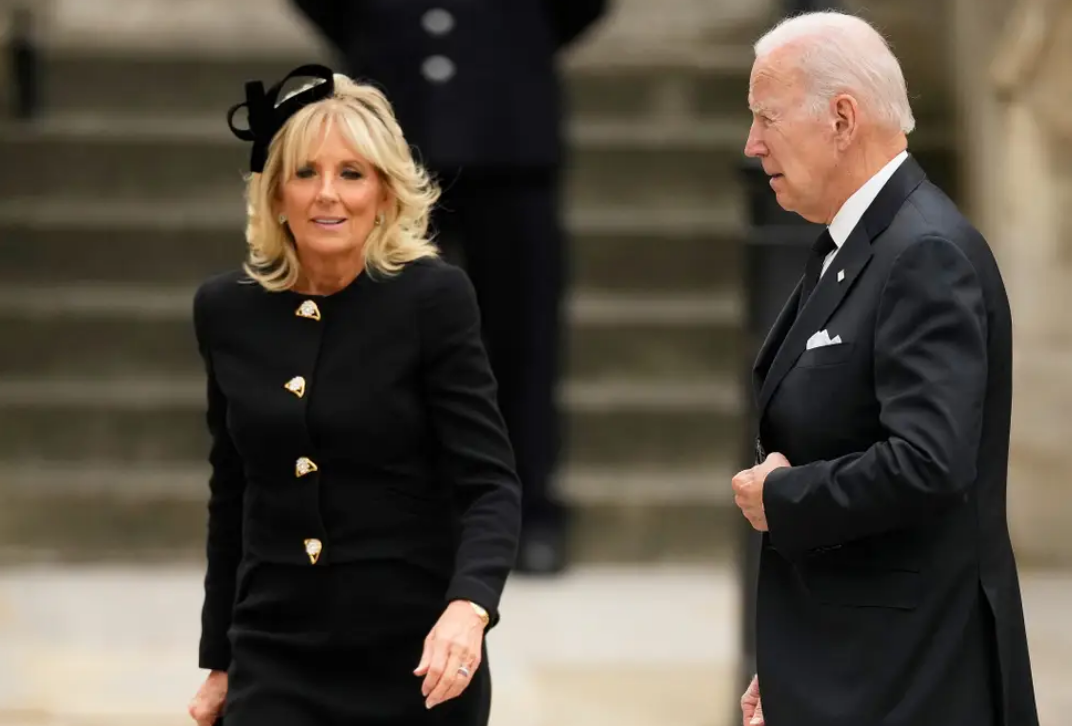 President Biden and First Lady Jill Biden are among 2,000 dignitaries to pay tribute to Queen Elizabeth II at her funeral at Westminster Abbey on Monday.

The US president and his wife were photographed arriving by car at Westminster Abbey before the service commemorating the late monarch began. The funeral comes over a week after the Queen died “peacefully” aged 96 at her residence at Balmoral, Scotland on September 8.

The president wore a black mourning suit while the first lady wore a black coatdress and a matching fascinator.

The Queen had met with a total of 13 presidents since 1951 – the first being President Harry Truman, who she met during a tour of Washington, DC, when she was a princess. After succeeding her father, King George VI, on the throne, the first US leader she met was President Dwight Eisenhower.

In June 2021, President Biden, 79, became the 13th president to meet Queen Elizabeth when he and the first lady traveled to the UK for the Group of Seven summit. Afterward, the president was invited to a private tea session with the monarch, who he said reminded him of his mother.

The day after the Queen’s death, the president shared his thoughts about the monarch in a handwritten tribute left in a condolence book at the British embassy in Washington, DC.

“The American people mourn today with people throughout the United Kingdom and the Commonwealth,” he wrote. “Elizabeth II defined an era. She led with enduring strength and dignity, devoting her whole life to serving her people. Jill and I will never forget meeting her and experiencing her warmth and kindness. She will be forever remembered.”

According to The Guardian, President Biden first met the Queen in 1982 when he was the Democratic senator for Delaware.

He is the only living US leader attending the monarch’s funeral at Westminster Abbey, which was also where the Queen’s wedding to Prince Phillip took place 73 years ago.

Donald Trump, Barack Obama, and George Bush – the three living former US presidents – are not attending the funeral.

White House press secretary Karine Jean-Pierre confirmed that only two official invites were extended by Buckingham Palace – one for the incumbent president and one for his wife – The Independent reported.

Ahead of the funeral, the president and first lady attended a reception hosted by King Charles III for all overseas leaders at Buckingham Palace.

After the service, the casket carrying Queen Elizabeth II will travel to Windsor Castle where she will be laid to rest in St George’s Chapel alongside the body of Prince Philip. The late Duke of Edinburgh, who died in April 2021, had initially been interred in the Royal Vault.