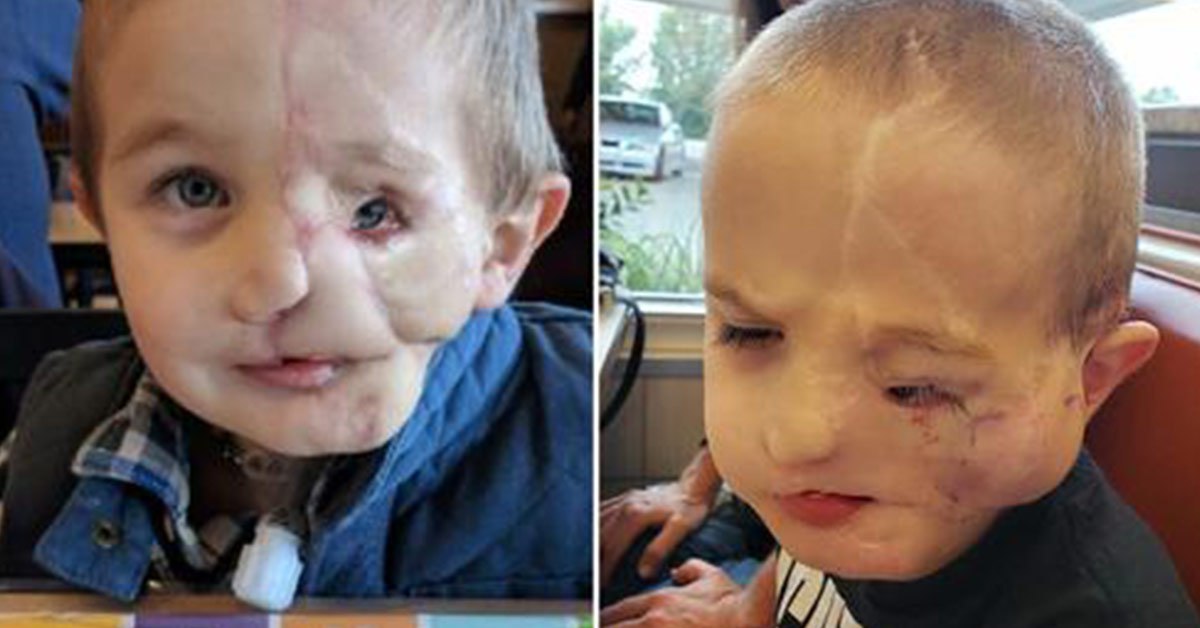 In 2015, when her son was just 21 months old, mom Brittany had every parent’s nightmare come true. While visiting family for Thanksgiving, two Rottweilers viciously attacked her baby boy Ryder. He miraculously survived the attack, however, not without permanent disfigurement to his face. Six years later, despite everything he’s been through, people call him a “monster” in public. His mom is now speaking out to make people aware of how harmful their words are.

Thanksgiving 2015 was a life-changing day for Ryder and his mom Brittany. That day, two nearly 100 pound Rottweilers attacked Ryder, who wasn’t even two years old yet. In the attack, Ryder lost his entire right cheek, the bottom of his eyelid, and three-quarters of his lip. The dogs crushed his teeth, broke his arm, and punctured his right lung. His family was terrified that he wouldn’t survive. Miraculously, however, he did. Unfortunately, the attack left his face permanently disfigured, among many other bodily injuries.

“It happened so quickly. We were visiting friends and they had a dog lap about the size of the dogs,” said mom Brittany. “We were eating breakfast and Ryder was back and forth to his toys and back for bacon then he disappeared. I looked out of the window and he was face down in the garden. He had pyjamas on and they’d been completely ripped off so he just had a sleeve on. When we picked him up and rolled him, his face was just gone.”

The dogs were taken away by animal control and put down the very same day. Brittany went on to explain that still they don’t know what exactly happened. Ryder had been around the dogs before and everything was fine. The doctors weren’t sure if Ryder would even make it. If he did, they told her that due to the depth of a bite into his skull, he might be paralyzed.

Since that terrible day six years ago, Ryder has spent over 70 hours in operating rooms. Doctors have done their best to fix broken bones and torn body parts, as well as reconstruct his face. They will still do more surgeries until he fully matures. Despite all of these efforts, Ryder still does not have what one might consider a “normal” face.

Ryder has been a lot in his short lifetime and has been an absolute trooper through all of it. His doctors warned that he may struggle to learn to eat and drink, but young Ryder has fought courageously and surpassed expectations. Despite what he has been through, his mom Brittany says that strangers are still shockingly cruel. When they’re walking down the street or doing errands, people will make nasty comments. Children on the playground will point and yell “monster!” at him before running away.

“In the beginning it was horrible because even adults would stare. For the first year, he had no face on one side because he had two unsuccessful skin grafts,” she explained. “When we go to the park, there’s a child who points and screams ‘monster’ at him before running away. Out shopping the other day someone shouted ‘ew’ at him.”

Brittany is naturally very concerned about her son as he is starting school. She is afraid that kids will treat him badly because he looks different. Now, she is speaking out against bullying, along with staring and mean comments that you may or may not think that they can hear.

“He knows that people are talking about him but he doesn’t say much. He wears glasses and a cap and sometimes he’ll hang his head to hide his face,” she said. “I try to deal with it in a better manner so it doesn’t affect him so much. But I just tell him every day that he’s beautiful, different is beautiful and it’s ok to be different.”

Of course, she wants her child to be accepted and have friends. Before Ryder began kindergarten, the other kids were told about him before he arrived. This way, it would not be so much of a shock for them. Still, there are always those one or two kids who will be mean regardless.