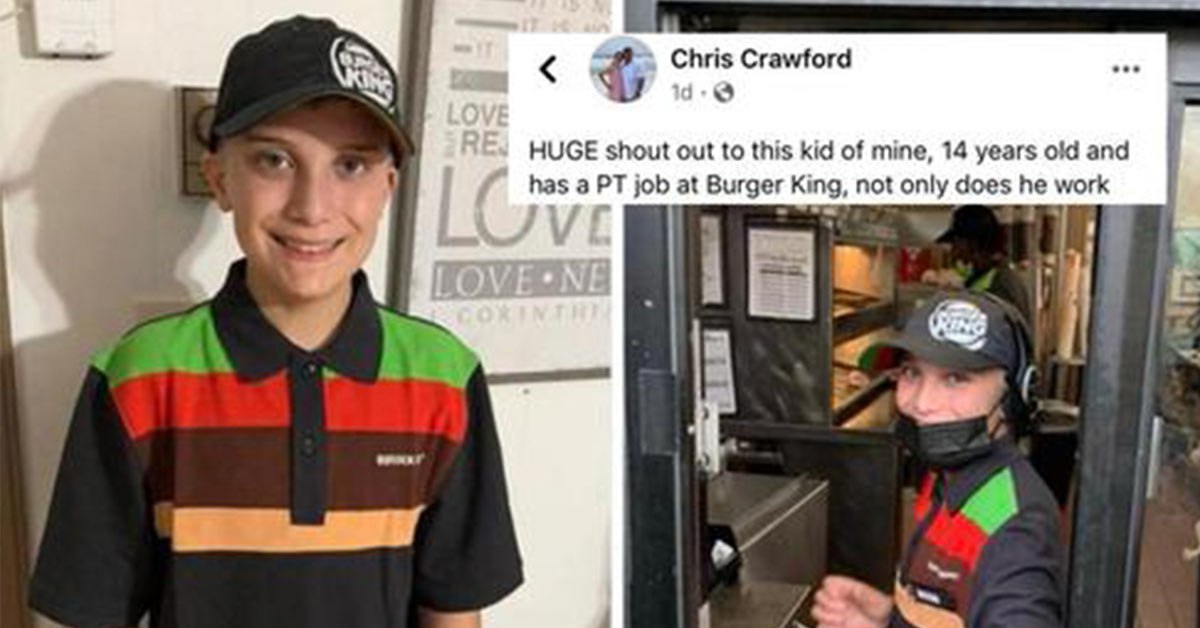 A father has caused mass Twitter outrage after his post about his 14-year-old son. His post was meant to praise his kid for how hardworking he was. Instead, it ended in people slamming him for not allowing his son to have a childhood and people questioning what is wrong with America.

A father posted to his Facebook expressing his pride in his hardworking son. In his post, he praised his son for working his part-time job nearly every day after school and on weekends.

“HUGE shout out to this kid of mine, 14 years old and has a PT job at Burger King. Not only does he work every day he can including weekends when most kids are out enjoying their summer, he goes in early and stays late almost every time he works. He loves every minute of it. Making his own money, saving for a car, being responsible in his decisions, becoming a respectable young man!!! I couldn’t be more proud of him! Some of y’all lazy, grown-a– people out there should take notes!!! #prouddad.” he wrote.

He likely expected people to be impressed and praise his son’s work ethic. Instead, he got quite the opposite: Twitter outrage.

A Twitter user tweeted his post on the platform. It sparked a massive debate, with most people being appalled at this young teenager’s life. People called it “depressing” and questioned the legalities of someone that young working so much if it was actually allowed at all. Many wondered why a father would be proud of this instead of concerned as to why their son wasn’t in extracurriculars and spending time with friends.

“I’m sorry but a kid choosing work over summer is an indicative of something dark happening somewhere. And for all those “muh but children must know how life works”: you’re actively supporting exploitation and child labor.” said one user.

Many others pointed out that this poor kid is missing out on the best parts of childhood and adolescence. They also questioned how he could possibly have any friends keeping up that kind of work schedule.

“So fun fact, this type of stuff causes psychological damage in adult life. As it turns out when kids don’t get their full childhood to be children they struggle to be adults in adulthood” wrote one.

“my kid has no friends, social life or hobbies, take notes grown adults!” wrote another.

How Beneficial Is This Schedule, Really?

Many people questioned how beneficial the lessons he was learning at this job actually are. They called upon their own experiences growing up and reminded people that sometimes these part-time jobs can do more harm than good.

“My parents essentially did the same thing (Taco Bell). What did it teach me? Weed is awesome, and the realities of poverty working with 30+ year olds on the lunch shift with dental issues and opiate addictions. I’m now 30+ socialist. Just saying that “hard work” bs can backfire.” one user wrote.

“How is he allowed to work those sorts of hours at 14? In my country, 14 yrs old can’t work except for school work experience, light work in the holidays (like odd jobs for neighbors type thing) or acting or sports. School is meant to be a kid’s job at 14,” said another.

Still, more brought up that they thought the minimum legal age for working was 15, so how was it even possible that this child had a job. Others made mention that in the photos, he appears to be working the drive-thru. Fast-food chain managers pointed out that this is a demanding and stressful position for such a young kid.

Not Everyone Was A Hater

Some people praised the kid and said that there was nothing wrong with it if that’s where he wanted to be. They called out the people speaking out against the post, saying that they were privileged and didn’t understand that not everyone has the luxury of not having a job as a teenager.

“Well if it’s sad– maybe middle/upper-class ppl can fight for better wage for service workers? Maybe ppl wouldn’t be forced to work? Oh. No. You just want to judge. Ok,” wrote one user. “If you didn’t have to work a fast food job as a kid, just say your parents took care of you, admit privilege.” (1)

At the end of the day, if the kid chooses to work that much, that is his choice. Also, if his parents decide that he has to have a job at such a young age, that is also their choice. No matter of twitter outrage and arguing will change that.