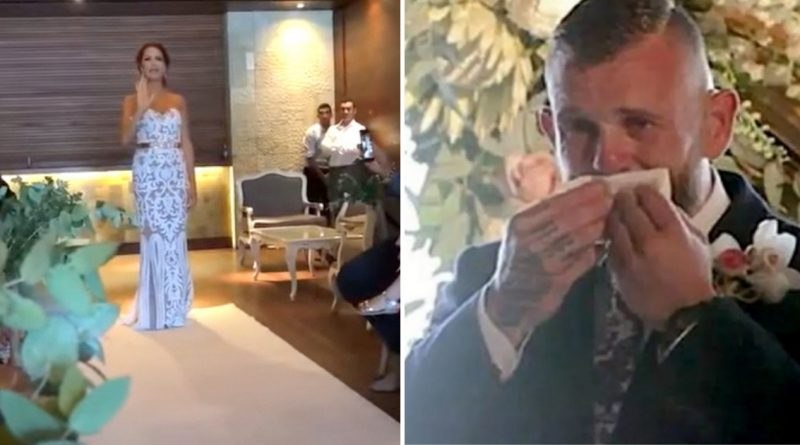 Elizabeth was about to walk down the aisle and marry the love of her life, Scott Shoesmith. She walked right to the beginning of the aisle, but she stopped.Elizabeth, or “Liz”, stopped and left her guests and groom guessing as to what would ever make her stop mid walk. She had an extra step planned and she wanted to leave her groom guessing.

Her beautiful surprise was about to have her groom in tears.Elizabeth and Scott met as most modern couples do, on a dating app. Liz then did another relatable action after matching with Scott, she stalked his social media.Scott’s social media revealed a fact that Liz did not know about him, he was deaf.

Elizabeth told Australia’s Today Show “…Best swipe right of our lives! …he didn’t tell me [he was deaf]. We cut straight to the chase and we said let’s have a date in 24 hours. Let’s go for a burrito. And as you do I stalked him leading up to the date and I discovered that he played for Australian deaf Wallabies. So my next immediate Google was, ‘how deaf do you need to be to play in the Australian deaf Wallabies?’”

SOURCE: FACEBOOK
Liz has never felt more heard than when she is with Scott.
Liz was nervous at first that Scott being deaf would hinder the communication in their relationship, but quickly realized after meeting him this was an unfair bias. Scott and Liz’s communication is the strongest she has ever felt in any relationship.

“When we first started dating that was one of the most magical things in the relationship. That people would say, ‘how do you communicate with him?’ I said ‘you have no idea, our communication is heightened, I am heard and seen in every word I speak. I don’t say anything unless he’s looking at me,’” Liz told Australia’s Today Show.

SOURCE: YOUTUBE SCREENSHOT
Liz had never felt more heard but she also knew the importance of learning sign language for Scott. Scott is an excellent lip reader but lip reading, on average, has a roughly 60% comprehension rate for those needing to read lips.

Liz wanted Scott to know every detail of their wedding day, including the music she chose to walk down the aisle too.

SOURCE: YOUTUBE SCREENSHOT
Liz decided she would surprise her husband to be by secretly learning sign language. She was not just going to reveal that she learned sign language on any ordinary day, she wanted to surprise him at their wedding. Liz was going to walk down the aisle to Christina Perri’s “A Thousand Years.”

Before she made the full walk to Scott on their wedding day, she signed every lyric of the romantic song to him first.

SOURCE: YOUTUBE SCREENSHOT
“For every joy he has brought into my life over the last two years, I wanted to surprise him with my entrance … I won’t lie, I was terrified before walking into the ceremony. But the moment I locked eyes with him I never looked away and it was a special moment just between the two of us,” Liz explained.

SOURCE: YOUTUBE SCREENSHOT
“I had no idea. When I saw her standing there at the aisle. She blew me away. I was totally gobsmacked,” Scott admitted.

Gobsmacked is putting it lightly. Scott was moved to tears by his beautiful and thoughtful bride.

SOURCE: YOUTUBE SCREENSHOT
The romantic moment not only moved Scott to tears, but millions of viewers. Liz and Scott only invited 45 people to their wedding and wanted all their friends and family to witness the beautiful moment. So, they shared the video publicly on their social media before going on their honeymoon.

The video gathered over 2 million views before their honeymoon had even ended!

SOURCE: YOUTUBE SCREENSHOT
Strangers are not the only people that have watched the video multiple times, so has Scott.

“He has re-watched the video a hundred times since and he still cries every time!” Liz told Love What Matters.

Watch the beautiful moment between Liz and Scott right below, it is so touching!