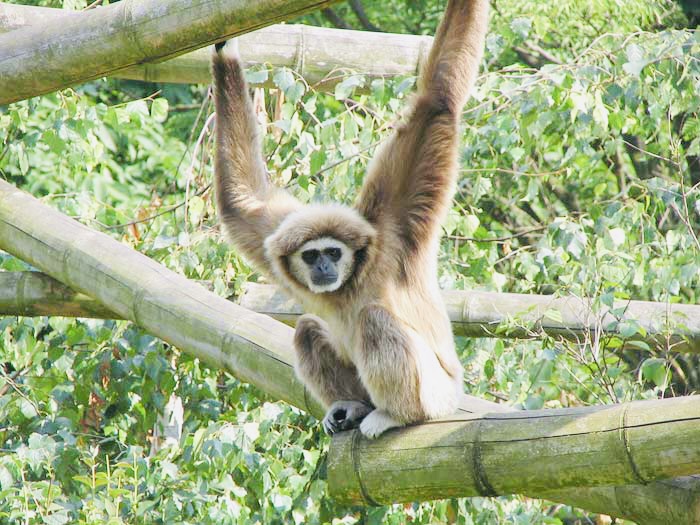 The great apes are said to be the closest relatives of humans. And unlike real relatives, they behave more or less decently: guests do not come without asking, they rarely turn up in the police.

They have long been gone, and, nevertheless, they are considered the ancestors of all anthropoids. Proconsuls existed on earth 27-17 million years ago. The most ancient ape of this genus is Camoyapithecus, the first primitive ape.

The Pliobats are fighting with the Proconsuls for the right to be called a human ancestor, although rather it is a struggle between two clans of scientists who are in no hurry to part with their beliefs. In favor of the definition of pliobats as an independent genus of anthropoids, their “infant” age compared to the Proconsuls speaks – only 12.5 million years. It’s more like a second cousin than an ancestor.

Gibbons are called small hominids (humanoids). This is true both in terms of size and in terms of similarity with a person. Nevertheless, there are common features, and some of them are very important. So, the number of chromosomes in Gibbons is 44 (humans have 46), and these monkeys are one of the few primates that move on the ground in an upright position, that is, they simply walk.

Those intelligent eyes seem to speak for themselves, but Hulok and the human have something else in common. Not chromosomes – they are the least among anthropoids (38 chromosomes), but the attitude towards marriage. Huloks are monogamous, they live in families, all members of which are closely related, and the heads of the family are their mother and father.

And this, on the contrary, is the most chromosome-rich genus of humanoid primates – as many as 52 chromosomes. Almost all species of this genus are in critical danger, some of them are only a few dozen left, alas.

The Siamangs, fortunately, were able to avoid the fate of the Nomascus. There are many of them, and these are the largest gibbon-type monkeys. Siamangs are distinguished by their loud voice, as well as their love of swimming. The cry of an adult male can be heard as far as 4 kilometers (try it yourself and you will understand how powerful it is).

If you compare Gibbons and Gorillas … however, there is nothing to compare. Gorillas are not only the largest of modern great apes, they have a lot of features similar to humans: speech (gorilla vocabulary consists of 16 words), reproduction features (timing of puberty, pregnancy duration), life expectancy and others, more specific.

Orangutans, by the way, have in their family a much more impressive person than a man – this is Gigantopithecus, the largest monkey in history. But even without a famous relative, Orangutans have something to be proud of – they are considered the most intelligent representatives of living creatures on earth (after humans, of course).

Chimpanzees are our closest relatives. They are omnivorous, aggressive, long-lived and intelligent. And if you want more solid evidence, humans share 96% of their genes with Chimpanzees. Chimpanzees are easily subject to human habits – most of all they like bad ones (who would doubt it), they can be taught to communicate, cook, dress, swim … What to say, until recently, the prefix “homo” was seriously offered to the Chimpanzee genus.

Yes. Scientists are categorical: the human race is a genus of anthropoid apes. Moreover, some of its representatives are doing their best to prove the correctness of this statement. Whether to refuse such kinship, or to strive to rise above the animal world, remembering their roots – every person decides, because it is not in vain that he is “reasonable”.