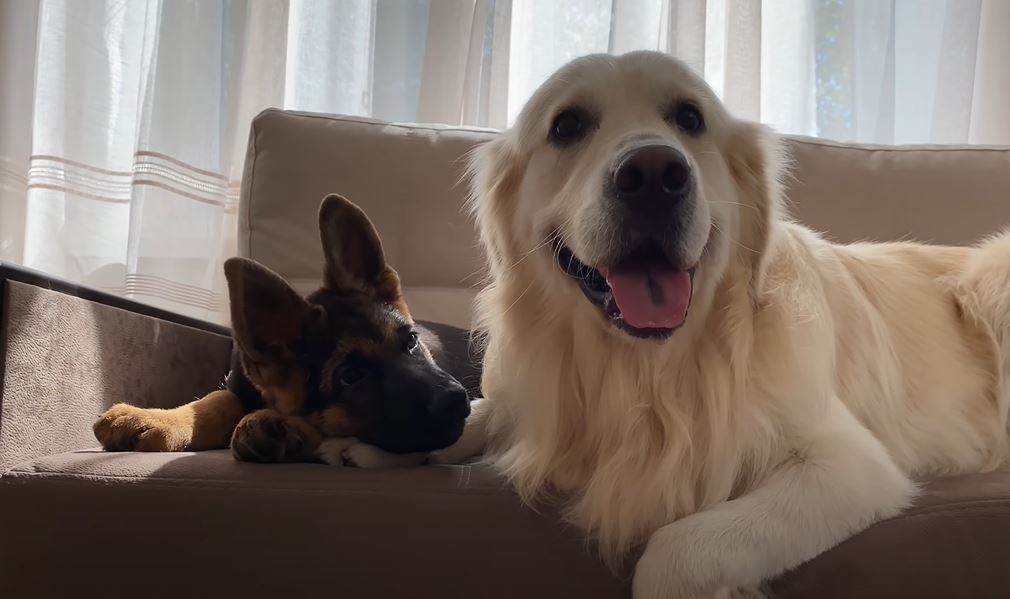 Bailey, the Golden Retriever, is a gentle and kind dog who lives with his owner Taras in Costa del Sol in Spain. Recently his story gained a lot of attention as he became a friend of a German Shepherd.

Bailey’s new friend is a German Shepherd named Rocky. The moment he finds Taras carrying Rocky in his arms, Bailey curiously observes him and sniffs to find out information about his companion.

However, as soon as Rocky tries to come closer, he seems a bit taken aback. Later on, the young one starts to play with Bailey, and he appears to be distressed by his new playmate, who is so comfortable around him. The facial expression of Bailey is too cute to miss.

On the contrary, Rocky is not scared of his new friend and loves playing around. Both Bailey and Rocky are growing up together and seem to be friendly after their time together.

Bailey and Rocky love to play with each other. However, Rocky gets pretty jealous when Taras cuddles with Bailey. So, he is left sitting on the couch, waiting for Taras to cuddle him.

Both Bailey and Rocky have fun together and love to play with each other. They like to hug and sleep beside each other. Bailey is growing older, but now both of them have become brothers.

However, they still can’t share Taras and feel jealous when he pats one of them. The other thing both Bailey and Rocky can’t share is their toys and indulge in a tug of war. But their love for each other does not reduce with these small fights, and they can’t leave each other.