Pet fox likes to merge with his collection of plushies 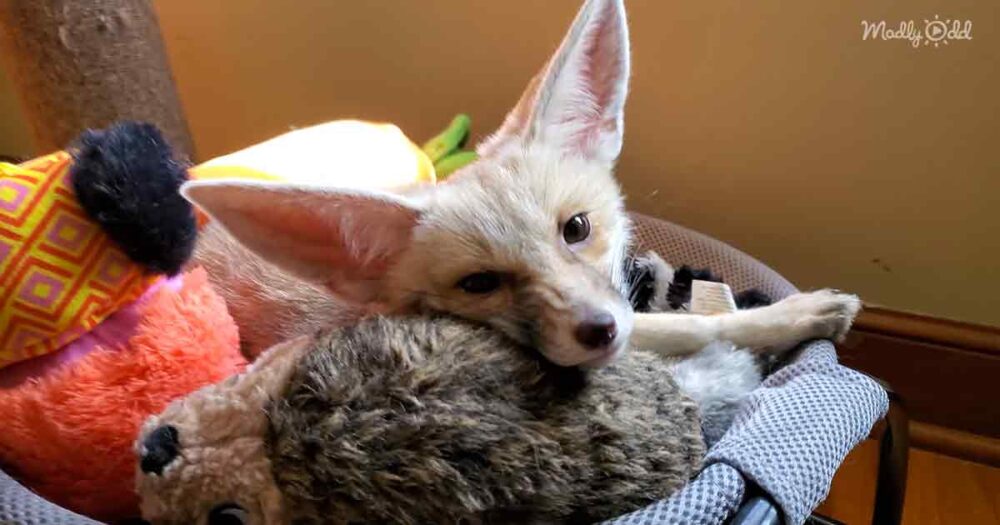 Mikayla Raines and her husband ran the “Save a Fox Sanctuary,” which took care of rescued foxes. She loved her pet foxes like her own children and cared for their daily needs.

Recently, Maikayla shared a moment where the kind woman spent a beautiful day playing with her pet fox, Fawzi. The little one was a Rüppell’s Sand Fox and was pampered by his parents.

Fawzi was resting in a room that looked as if it was customized for Mikayla’s adorable pet foxes. The little one was sitting between his toys and was barely recognizable as there was no difference between the plushies and the fur baby.

Mikayla started to talk to Fawzi as if she was talking to a human toddler. Surprisingly, Fawzi also responded to his owner with low sounds while enjoying being petted. Mikayla would mimic Fawzi, and he would do the same.

The pet fox seemed lazy and was not ready to move away from his collection of soft toys. However, when the owner came close and started to kiss him, the little fox showered her back with kisses.

The little fox with pointy ears and baby-like appearance made cute sounds, confirming that he loved and trusted his owner like a family. At one point, Fawzi was lying on his back and behaved like any pet dog wanting to get a belly rub.

Mikayla had even got the little one another plushy to add to his collection. Fawzi was so excited to get the new toy that he started playing with the ball. The beautiful fox knew he was loved and felt pampered.