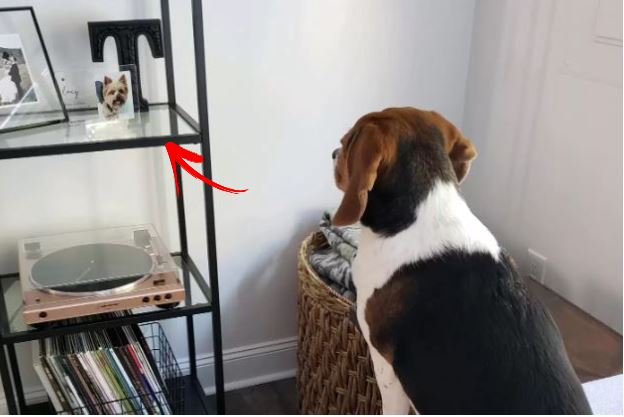 Those we love will never truly leave us. And this sweet pup named Lola is sure of it.

A few short weeks ago, Lola lost her best friend and sister, Lacy. But she and her family have found a special way to keep the pup’s memory alive.

Lacy was 10 years old when she first met the beagle puppy. Having lived her life as an only dog, she wasn’t thrilled about the new, excitable arrival. But it didn’t take long for Lola to win her over.

After four years of friendship, Lacy’s health took a turn. Still, Lola remained by Lacy’s side, comforting her in any way she could. “When Lacy’s health started declining, and she started coughing more often, Lola was always so concerned about her,” Trent said. “Lola just always looked out for her. It was the sweetest thing to watch.”

Lola wasn’t present when Lacy passed. And when she finally realized her friend wasn’t coming home, her reaction was heartbreaking.

Trent purchased a memorial gift with Lacy’s picture on it for her and her parents. When it came in the mail, Trent put the photo on a shelf in the living room, where it caught Lola’s eye.

Trent was surprised, as Lola had never been interested in her home’s decor before, but something was different about Lacy’s photo. It was as if Lola knew the photo was of her best friend.