Whisker them away: These three NYC cats travel the world with their owners 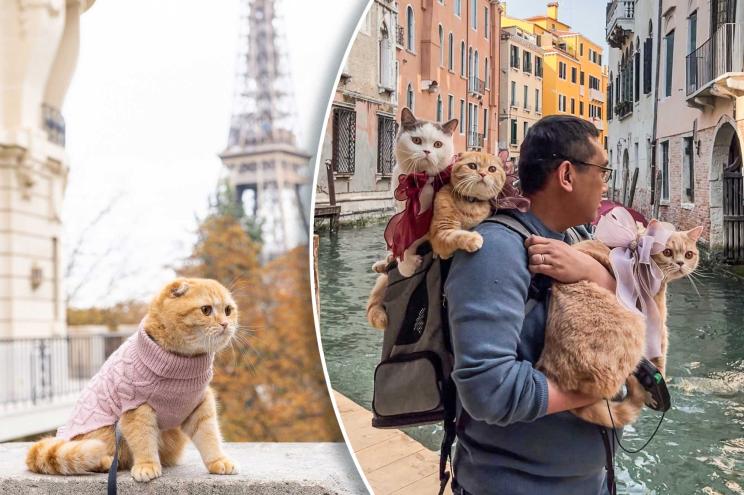 Felines Sponge Cake — a Scottish Fold — and British shorthairs Mocha and Donut have traveled to France and Italy with their owner Dan Nguyen and his wife, Olivia.

But they’re not just hanging out in hotel rooms, or even in carriers. The trio — all 2-year-old males — have posed in front of the Duomo in Milan, seen the Eiffel Tower and even cruised the canals of Venice in a gondola.

And while the idea of taking most cats anywhere might sound crazy, if not impossible, Dan, a corporate attorney, insisted he couldn’t leave them at home.

“We had a few trips planned and we wanted to bring them with us. It was hard to not be with the cats because we consider them our family,” he told The Post. “We know it’s a little untraditional to travel the world with a cat, let alone three, but we love them and they love us, so it doesn’t feel so crazy to us”.
Dan Nguyen takes his cats Mocha, Sponge Cake and Donut with him most everywhere — including when the New Yorker visits Times Square.
Olivia Nguyen
To get these house cats ready for the great outdoors, Dan and Olivia started close to their Midtown home: Central Park, where the felines graduated from pet carriers to leashes.

“They seemed to enjoy being outside and exploring,” said Dan, who could tell they were happy when they went from cowering near his feet to sniffing the air, lounging near the lake and playing in the grass.
That was soon followed by trips to San Francisco and Sacramento, Calif. As for getting there, “That was pretty easy,” he explained. “They mostly just sleep on the plane. They’re all so relaxed and quiet. Sometimes, other passengers on the plane don’t even realize we have three cats with us.”

They hit the ground running in Paris: “We put them down on cobblestone streets and they took off, exploring every storefront until they decided to stop at a patisserie,” Dan said. “Everyone walking by stopped to watch these little kitties discovering the shops of Paris.”

Then, he added, “We took them to Venice and they loved it. They were sniffing everything and ‘loafing’ on the walls of the canal.
Mocha is “super sweet. He will let other people kiss him on the head and generally is just super relaxed with either people or other animals,” Dan said. Donut is the most social of the three: “He practically begs to go outside often now. He lets us know by scratching the front door and meowing.”

The cats didn’t need anything more than a few vaccinations for their initial travels. However, for the family’s upcoming trip to Switzerland this fall, the trio will be getting their own European Union “pet passports” as they travel between countries.

“On social media, it looks like we travel all the time, but it’s really only twice or so a year,” Dan said through a laugh. “We have enough content to post on social media all the time because we’re always taking photos of them when we take a trip.”