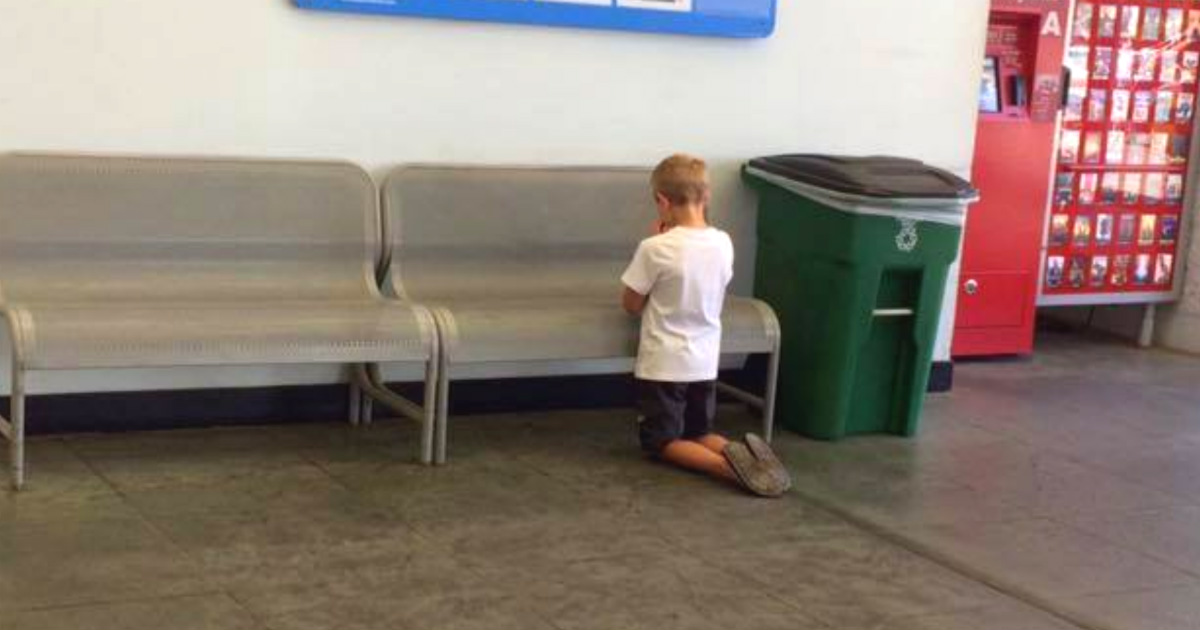 Going shopping with kids can be fun- you get to spend quality time together, visit shops and have snacks throughout the day. However, it can also be really stressful, especially if we’re talking about young children that need to be held most of the time so that parents can be sure they don’t get lost.

It was a summer day and young Braydon, accompanied by his mother, entered Walmart to do some last-minute shopping. The mother was in a hurry, quickly walking with her son by her side through the aisles. At some point, she turned to make sure Braydon was following her, only to realize he wasn’t.

She started looking for him, with her anxiety levels getting higher and higher. She decided to trace her steps back from the time they entered the huge store. Finally, she found him kneeling before a bench- she was relieved but also mad at him because he had left her side. She was also curious about what he was doing there. And then it hit her: on the wall her son was facing while praying, there was a board reading “Every Second Counts”.

The board was dedicated to the children who had been reported missing around the country, asking for anyone who knew something about them to take action and let the authorities know. Apparently, all that a young boy could do to help was pray for the missing children to safely return home and be reunited with their families. Braydon’s mom got really emotional at this sight.
Braydon’s story was posted to Facebook and soon went viral, receiving tons of positive comments and praise for the compassion the little guy showed.

One Facebook user commented below the picture: “Next time I’m at Walmart I’ll whisper a prayer for the missing. This child has started something great. Thanks Braydon”

But this is not all. The post that was shared more than 100K times, reached some of the families whose children were missing at the time. More specifically, the Facebook page “Bring Aubrey Home”, dedicated to missing teen Aubrey Carroll of Georgia, who had disappeared in 2016, publicly thanked little Braydon for taking some time to pray for the missing boy. It appears that the teenager was found 2 years after his disappearance, healthy and unharmed, and was reunited with his family.

According to the International Center for Missing and Exploited Children, in the USA an estimated 460,000 children are reported missing every year. The Polly Klaas foundation reports that “nearly 90% of missing children have simply misunderstood directions or miscommunicated their plans, are lost or have run away.”

This makes the need for clear instructions/directions given by parents/relatives/custodians crucial for the child’s safety. It also calls for better communication on a deeper level between parents and their children, so that they don’t feel the need to “escape” from home. It is important for children to feel that their parents understand them and support them, so there is no need to run away from them.

To conclude, Braydon’s act may be perceived by some as naive, but, whether one believes in God or not, it still is a manifestation of compassion, empathy, and kindness. Let’s keep in mind that if we all show some support and love to each other, the world will soon be a better place.