Remembering the dedicated dad who pushed his son through more than 1,000 races over 40 years 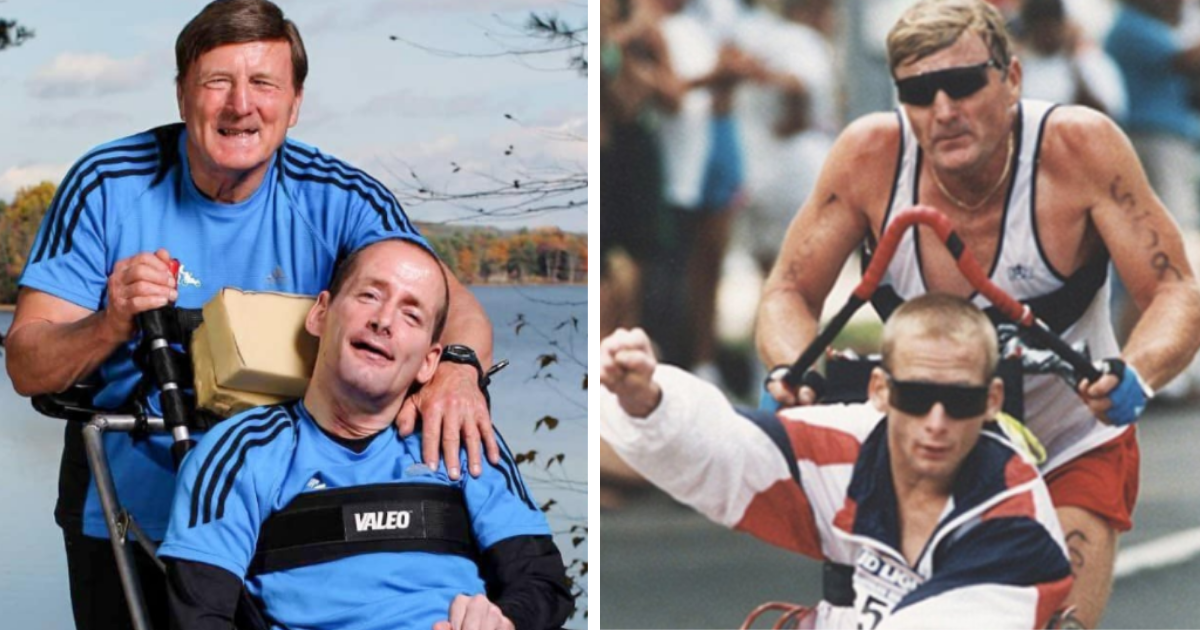 Anything is possible as long as you put your mind and heart into it. May it be swimming across a lake, singing in front of a crowd, or traveling to the Moon. Whether you have a disability or not, you can do anything. This father and son proved to the world that racing is possible even when you have spastic quadriplegia.

Based on the Centers for Disease and Control Prevention, a cerebral palsy is a group of disorders that affect a person’s ability to move and maintain balance and posture. There are different types of cerebral palsy. One is spastic quadriplegia wherein all four limbs, the trunk, and the face are affected.
People with this disability usually cannot walk. But, Dick and Rick Hoyt proved to everyone that it is possible.
Dick and Rick Hoyt were an unforgettable team. For over 40 years, Dick Hoyt ran the Boston Marathon with his son, Rick Hoyt, to inspire other kids with special needs that anything is possible. They did an amazing job that people all over the world are inspired by their story.

You see, Rick was born with cerebral palsy and he was quadriplegic. Doctors advised Dick and Judy Hoyt to consider putting their son in a special care facility. But, Dick wasn’t having any of it. He wanted to raise his son like any other child.

“We cried, but we talked and we said, “No, we’re not going to put Rick away. We’re gonna bring Rick home and bring him up like any other child,’” Dick Hoyt told ABC News.

Dick and Judy made the right choice. Rick grew up in a happy and loving home.

With his family by his side, he felt cherished and loved. His family even worked with engineers at Tufts University to get him an interactive computer. In this way, he can communicate with tabs on his head, Thanks to his family’s endless support, Rick graduated from Boston University with a degree in Special Education in 1993.
One day, Rick asked his father if they can join a 5-mile charity run.
The charity was for a lacrosse player who’d been paralyzed in an accident. Dick approved, so he ran while pushing his son on the wheelchair. The duo astounded and inspired so many people.

They came in next to last, but the experience changed their world.
“When we got home that night, Rick wrote on his computer, ‘Dad, when I’m running, it feels like my disability disappears.’ So that was a very powerful message to me,” said Dick.

With a renewed vigor, Dick began to train. He trained for hours, so his body is prepared to run and push his son through every race. From then on, they began to run in more than 1,000 races.

The duo even completed duathlons and triathlons. Dick would use a bungee attached to a vest he wore to pull Rick in a boat while he swam. They would also use a two-seater bicycle during the cycling part.

The father and son were an amazing and inspiring team! They inspired everyone that no disability can stop you from doing things you love.

Dick Hoyt was the embodiment of dedication and determination.
At the ripe age of 80 years old, Dick passed away peacefully in his sleep. His other sons, Russ and Rob Hoyt were the ones who broke the news to Rick about their father’s death.

Moreover, Russ wants everyone to remember Dick as more than just a father who pushed his son through the race.
“I know it’s a cliche, but I want people to know that I thought my father was a hero, not just because he pushed Rick in the marathon, but because he was a great father to all of us you could talk to about anything,” he said. “He inspired people to look at all their children as equals no matter their disability.”