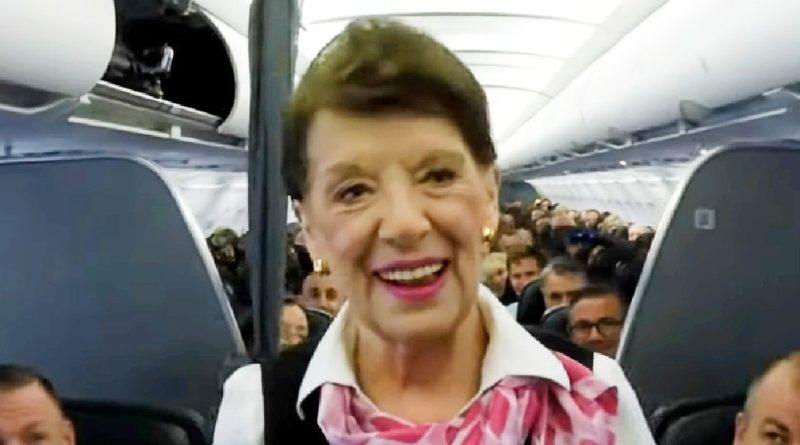 Indeed, when you embrace and love your job, you will strive, and you won’t even realize that you’ve spent years working.Bette Nash, 86, holds the title of the world’s longest-serving flight attendant by Guinness World Records. At 86, this beautiful flight attendant is still working.

Nash started her career with Eastern Air Lines on November 4, 1957. She clearly recalls her first day at work. It was a month after the Soviet Union launched Sputnik.Sputnik was the world’s first artificial satellite.Over the years, there were many airline mergers.Nash finally ended up working for American Airlines, and last January 2021, Guinness gave her the recognition.

Nash achieved 64 years and 61 days of world-class employment.Last March 29, 2021, American Airlines posted a tribute to Nash on their Instagram account.

Can you imagine Nash’s dedication and love for her work?Some people find routine unexciting. You do the same task daily, and over the years, you lose interest.

For Nash, having a job that allowed her to earn and go home to her son on time is a blessing.According to reports from ABC News, Nash spent most of her career as a flight attendant working on the New York-Boston-Washington shuttle.

This allowed her to go home at night so she could take care of her disabled son.Until this day, this amazing woman tirelessly works as a flight attendant and goes home to take care of her son.People have searched for Nash to take a photo and ask her how it was in the past.

What was it like sixty years ago?According to Nash, getting into her field was tough. You had to qualify before you could get interviewed. There were height and weight requirements, and they were very strict.

“You put on a few pounds and you had to keep weighing yourself, and then if you stayed that way, they would take ya off the payroll!” Nash shared WJLA-TV.

Part of her job was handing out matches and cigarettes after each meal service.There were also options for passengers to buy life insurance from a vending machine.
“When it started, I think it was $12 one-way,” Nash recalled.
When Nash talks about her adventures, people listen like kids.Nash deserves her Guinness title and more.This single mother works tirelessly, providing world-class service with a smile. Then, at the end of the day, she goes home and hugs her son.

She takes care of him as a single mother.The next day, she heads for work again. That’s how amazing she is.Despite that, you look at her and she’s as young as ever.Bette Nash, you’re such an inspiration.