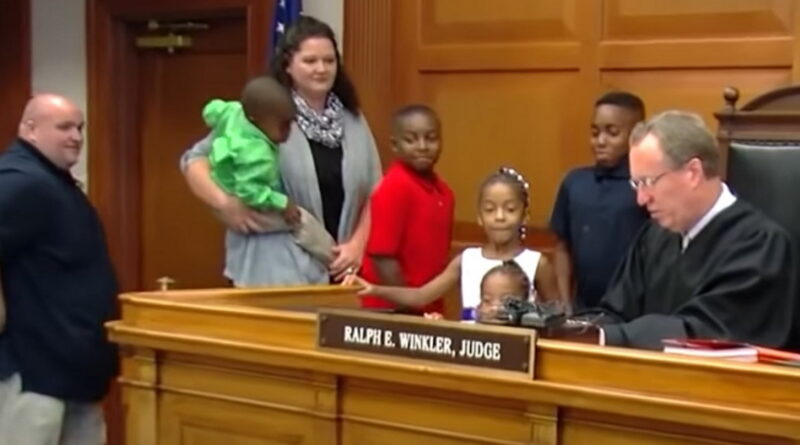 Julie and Will Rom always dreamed of being parents. Since they were unable to conceive they decided to become foster parents.
“We [said], ‘It’s not meant for us to be parents right now. Let’s foster and be the bridge for these kids while the parents get themselves together and eventually get themselves through reunifications,’” Julie Rom told ABC News.

The Roms took children from the foster care system into their homes for about a decade.“We’ve always said that when we had children come into our home, we would never have them uprooted another time,” Julie Rom said. “If the opportunity came along, that we would just keep them.

It’s extremely important that they do stay together because they’ve lost so much from their past.”

They just didn’t imagine that that opportunity would include not one, or two, but five children.

Siblings Will and Truth came into the Roms’s care in 2014.
The Roms had fostered children long-term before this, but Will and Truth were still in their care by the time their sister Mariana followed in 2015.

“To me, they’ve been my kids. I don’t feel any different than I did this time last week. They’ve been waiting for this. It was more relief than anything,” Julie said.

The adoption was made official by Judge Ralph Winkler at the Hamilton County Probate Court.

“I am excited and happy for the Rom family and their future together,” Winkler shared with ABC News. “They changed 5 siblings’ lives forever by adopting them into a safe, loving and caring family. My greatest hope is that the Rom’s 5 adoptions will encourage more and more good people to adopt children.”

The Roms children’s former teacher Ann Boyle was “elated” to see the children adopted into a loving home.

“Julie and Will had so much love in their hearts the moment they took them in,” Boyle said. “There was a 180. [The kids] were smiling, they were talkative. I knew it was the right path for them. [Julie] got them into church she got them active in sports. There was no sadness in their eyes anymore. She treated them as their natural kids and I saw that from day one.”

Speaking of home, they needed to upgrade from a three-bedroom ranch to a five-bedroom two-story house to accommodate their new full house.

And the Roms were happy to do it.
They never thought twice about separating the siblings. Unfortunately, that’s not always the case when it comes to siblings in the foster care system.