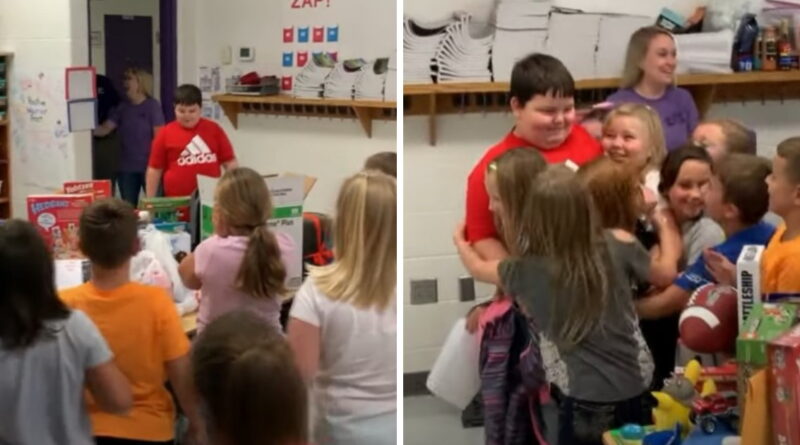 It’s hard to imagine what it would be like to lose all your possessions in the blink of an eye. But that’s exactly what many people experience during a housefire.One family from Pennsylvania, Tennessee lost nearly everything after their home went up in flames.The family’s 8-year-old son, Daniel, lost all of his toys and watched his family’s home burn down, which would take a big toll on just about any kid.

But just when he felt like he had lost so much, his third-grade classmates stepped in to help make things better.His classmates decided to launch a toy drive just for him.While they couldn’t do much in the way of finding Daniel and his family a place to live, one thing that children are great at is finding good toys.

Fortunately, these third-grade students are also already experts on selflessness. When their teachers suggested a toy drive, the kids went all in.

Because Daniel lost his toys and was experiencing an extreme hardship, his classmates decided to pitch in and each bring in one of their favorite toys. They hoped it would brighten his day and let him know that they were all supporting him through this tough time.

They decided to surprise Daniel with all the toys.
Each student brought in a toy to give to Daniel, but they hid the toys from Daniel for a while. The children had a week to bring in the items, so each day the pile of toys would grow as more donations came in.

On Friday, after all the toys had been donated, a teacher sent Daniel out of the classroom on an errand, giving everyone else time to set up for the surprise.

When Daniel walked back in the classroom, he saw a giant pile of toys all for him, and his classmates cheering “surprise!”

Before looking at the toys, he hugged his classmates first.

Daniel’s reaction is so heartwarming! Despite the massive pile of toys for him to check out, he decided that it was more important that he have a big group hug with all of his classmates first.

He motioned to his classmates and stretched his arms out wide and then everyone ran in for a big group hug. Watching it, you can see how genuinely happy everyone is in the moment.

Daniel’s classmates had nothing but positive things to say about him.

When an interview from CBS Evening News asked the children why they did something so kind for their classmate, they all mentioned how kind and good of a friend Daniel is. One girl said:

“Daniel is a nice friend and he’s always there for us when we need him to give us a hug and be kind to us.”

Meanwhile, other classmates mentioned how good it felt to do something nice and selfless for another person.

The kindness that these children showed brought their teacher to tears.
While tearing up, she says:

“I’m so proud. I love how much love they have to give.”
So many teachers don’t just want their students to learn facts and figures, many of them hope that their young pupils will also learn important lessons in kindness and morality. Daniel’s teacher can now be assured that her class knows about those important life skills.

This toy drive helped Daniel a lot in his time of need, and everyone got to learn how good it feels to be selfless.