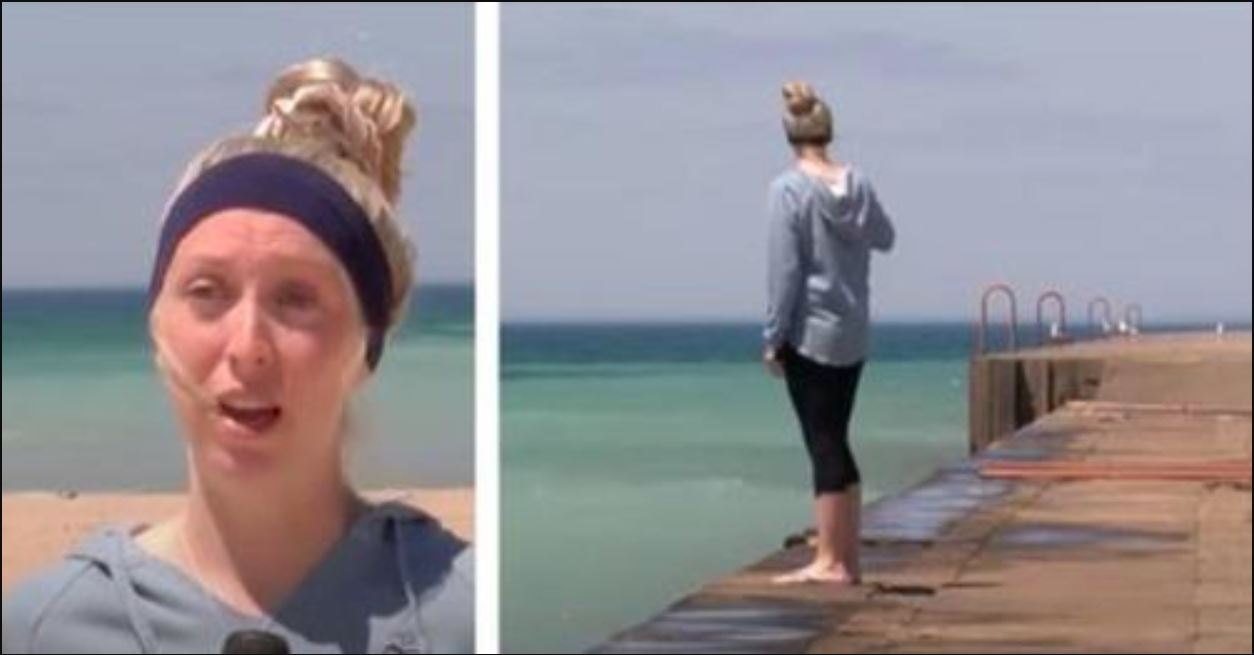 When the woman saw the kids fighting with the waves, she knew she had to act fast.
Lake Michigan is known to be the “Deadliest” Great Lake and there’s a reason for that.

Last year, there were 109 deadly swim-related accidents on the Great Lakes, with about half of the deaths occurring in Lake Michigan.

This year, until May 7th, there had been 6 drowning deaths on this same lake already.

Although the number is already high, it could have been higher by at least three, if a young woman hadn’t saved three children who were drowning in the lake a few days ago.
Pregnant woman heroically finds the strength to save 3 kids from drowning
A few days ago, five months pregnant Alyssa Dewitt of Manistee, Michigan, was at the beach with her children, when she noticed something was wrong at the First Street Beach Pier.

The woman saw three children under 15 waving from the water and she realized they were in danger.
Dewitt immediately called 911 and let them know there was an emergency.

“The best I could do was just kind of scream into the phone that I needed help, there were kids drowning,” she told TODAY.

But the woman knew the waves were too dangerous and that she had to act fast if she really wanted to save these children.
So, after making sure her own children were safe, she put her phone down and tried to pull the children out of the water herself.

“I put my phone down with 911 on,” she recalled, “and I laid down over the side of the pier” and tried to help the children.

However, the waves were coming back stronger each time.
“Every time I would grab their hand and get them partway up, a wave would come and smash into us and pull them back down,” she said.

But, one thing she will remember for a long time is that girl telling her she was going to die. Dewitt promised that she wouldn’t let her die in the water.

“This girl looked at me and she said ‘I’m gonna die.’ It makes me cry every time I think about it,” she said. “I told her, ‘I promise you I am not gonna let you die out here; I am gonna get you out of this water.’”

Indeed, she didn’t let those children die. On the contrary, she pulled each one of them out of the water before it was too late.

Thankfully, when the children were out of the water, the police arrived and took the kids to the hospital.

Manistee City Police Chief Josh Glass said the children are doing well, and that they only sustained minor injuries. Dewitt and her unborn child are also fine.

The young mother still can’t believe how she managed to remain calm and summon all the strength- physical and emotional- she needed in order to save the children.

“When you have someone who puts their safety aside to help strangers, it’s amazing,” Glass said, highlighting that Dewitt should be considered a hero for what she did.

Indeed, the easiest thing would have been to decide it was too dangerous to get involved, but it seems Dewitt is one of those capeless heroes that make the world a better place.

The woman believes it wasn’t a coincidence that she was at the beach that day- and she might be right.