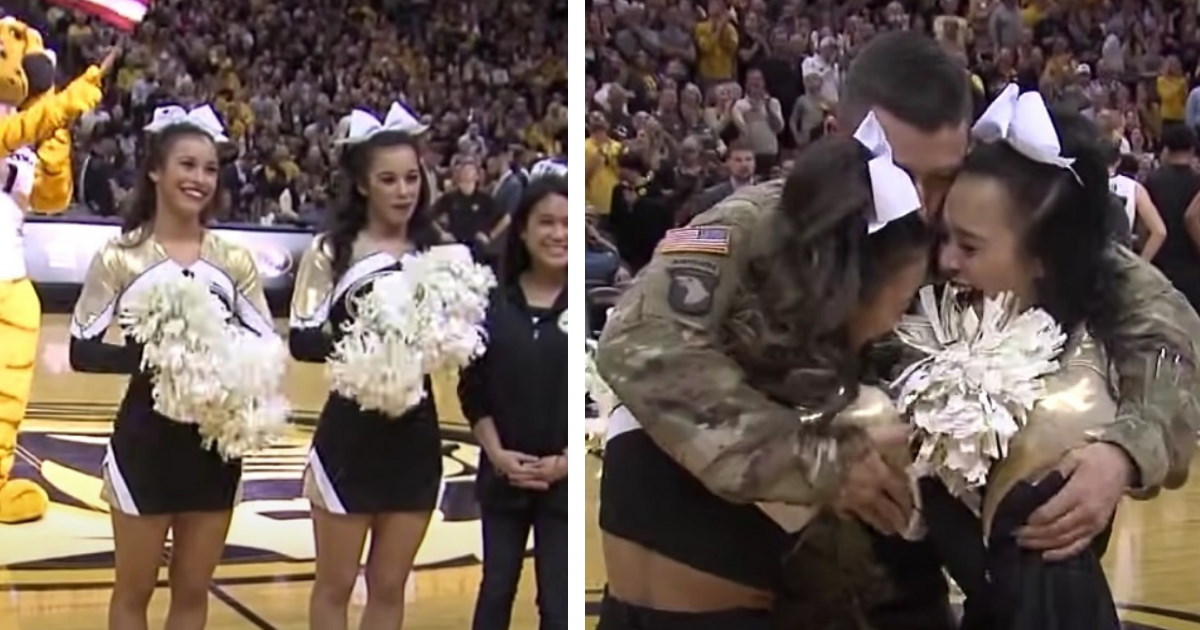 Having a parent in the military is just one of those things that not everybody understands. Still, we can all understand how much it means when a family is reunited for the first time in months.For two twin sisters, that reunion was about to happen while they were cheerleading in front of thousands of people. It’s safe to say that there wasn’t a dry eye in the stadium!

Capt. Kody Kemerling is a member of the Army Reserves and had been deployed in Kuwait for 10 months.Essentially, Capt. Kemerling had been on an island in the middle of nowhere for almost a year. While anyone going into the military knows that spending time away from your family is tough, almost a year gone starts to wear on you!

Eventually, his deployment was up. Instead of telling his daughters, however, he decided to be a bit sneakier!

Maria and Micaela are the twin daughters of Capt. Kemerling and are cheerleaders at the University of Missouri. The two cheer together at many of the games, so having the spotlight isn’t something new to them. What was about to happen next, however, totally was!

The twins’ coach told them they were going to do a special element to celebrate their dad for Veterans United Hero of the Day.

Heading out onto the court, they got to represent their dad in front of their whole school! While it was cool, it wasn’t nearly as cool as what was about to happen next.

“We were cheering at the Mizzou basketball game and we were just told that we were going to go and represent our dad out there for the Veterans United Hero of the Day and we had no idea that he was going to be there,” Micaela Kemerling shared with Inside Edition.

As they cheered, they noticed that something was happening behind the scenes. This wasn’t just them representing their father, something bigger was going on here!

All of a sudden a hand grabbed Micaela and turned her around… it was her dad!

“All of a sudden I just felt someone grabbing onto me. My initial reaction was, ‘Who is grabbing me, like what is going on?’ and then I turned my head and realized it was him,” Micaela said.

In front of their entire school, the twins were totally surprised and taken aback at seeing their dad for the first time in almost a year! As you might imagine, both of the girls immediately broke into tears as they realized what was happening wasn’t a dream, it was real.

It took the coordination of their cheer coach, the college, and their entire staff to make the event happen. Even with a few white lies said to keep the illusion going, the end product was totally worth it.