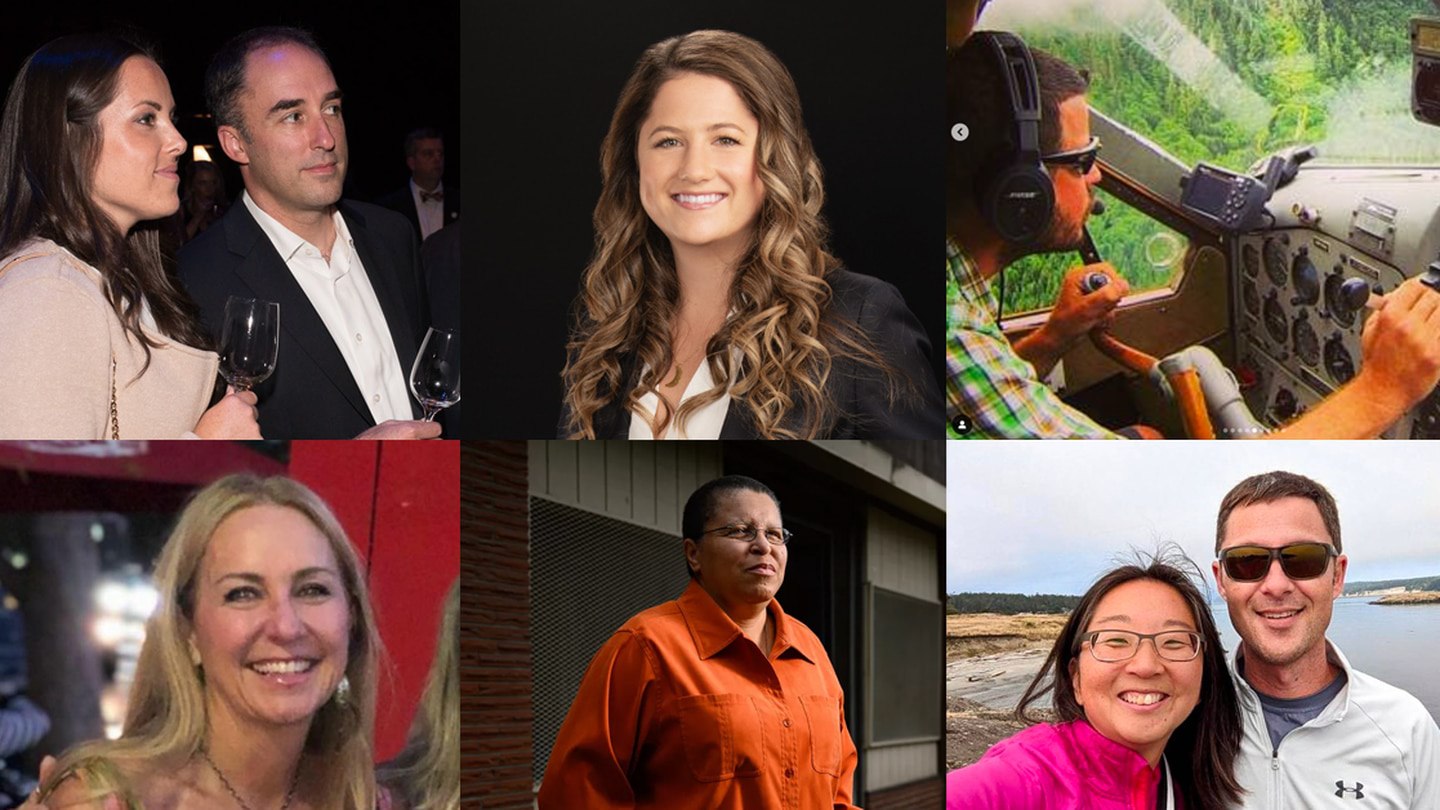 WHIDBEY ISLAND, Wash. — The U.S. Coast Guard has released the names of all 10 people who were on a floatplane that crashed off Whidbey Island on Sunday.

Nine adults and one child were on board the plane when it went down at 3:11 p.m. One person was found dead at the scene. The other nine victims are missing and presumed dead.

A verified GoFundMe for the family of Winters was established and raised over $20,000 in less than 24 hours.

According to the GoFundMe, setup by a fellow employee at Northwest Seaplanes, Winters was a loving father and husband.

Williams was reportedly a civil rights activist who founded a Black newspaper, The Black Lens, and a community center, Carl Maxey Center in Spokane, according to The Spokesman-Review.

Many people have been sending tributes to Williams, including state Sen. Andy Billig, who serves the 3rd legislative district of Spokane.

He said in part about Williams in a Facebook post, “Sandy was a leader in the best sense of the word. She worked with others to create a vision for positive change, crafted a plan to achieve that change. Then, she dug in to do the work and others lined up to follow her. Her incredible work to create the Carl Maxey Center will leave a legacy of positive impact for generations to come and she was also a driving force to create and pass the bill to transition surplus WSDOT land in East Central from vacant lots into badly needed housing. You will be missed, Sandy. RIP.”

According to the Seattle Times, Patt Hicks was a retired schoolteacher from Los Angeles who was on her way back from a vacation in the San Juan Islands with her partner, Sandy Williams.

The above photo is of (from left to right) Williams, Spokane councilmember Betsy Wilkerson and Patt Hicks.

According to WCCO.com, a family member confirmed Luke Ludwig, 42, and his wife, Rebecca Ludwig, 42, were killed in the crash. The married couple from Minneapolis lived in Excelsior. Their children are safe and with other family members.

Joanne Mera, 60, is from San Diego and the CEO of a successful event company. She was visiting family at the time of the crash. She’s survived by her three children, her husband of over 30 years, sisters, brothers, nieces and nephews. A statement from the family said, “Joanne Mera was someone everyone gravitated towards, she was the life of any party and the soul of our family. She was the best mom, wife, sister and friend. Our hearts are shattered, not just for our family’s loss, but for the loss we know other families are feeling right now.”

Gabrielle Hanna, 29, was an up-and-coming attorney in Seattle. In a statement from her employer, Cooley, they said, “Gabrielle Hanna, our colleague and friend, lost her life in a tragic floatplane crash that also claimed the lives of nine others. Starting as a summer associate with us, Gabby spent the entirety of her all-too-brief legal career with Cooley. In her few years with the firm, Gabby had already established herself as a true talent and team player who was dedicated to providing our clients with service and advice of the highest quality. As importantly, Gabby was always quick to smile and was a true believer in — and contributor to — the Cooley culture. She will be deeply missed.”

Ross Mickel was the owner of the Eastside-based Ross Andrew Winery. His wife, Lauren Hilty, and their 22-month-old son, Remy, were also on the plane, according to a report from The Seattle Times.

According to TMZ, Lauren Hilty is the sister of “Smash” actress Megan Hilty, who also played Glinda in “Wicked” on Broadway. Lauren was also pregnant at the time of the crash.

All victims were identified early Tuesday after the Coast Guard had suspended its active search for nine of 10 crash victims on Monday afternoon.

The person whose body was recovered at the scene was transferred to the Island County coroner and has not yet been positively identified. It is Coast Guard policy not to release the names of the deceased or missing until at least 24 hours after the next of kin have been notified.

“The Coast Guard offers its deepest sympathies to those who lost a loved one in this tragedy,” said Cmdr. Xochitl Castañeda, the search and rescue mission coordinator for the crash.