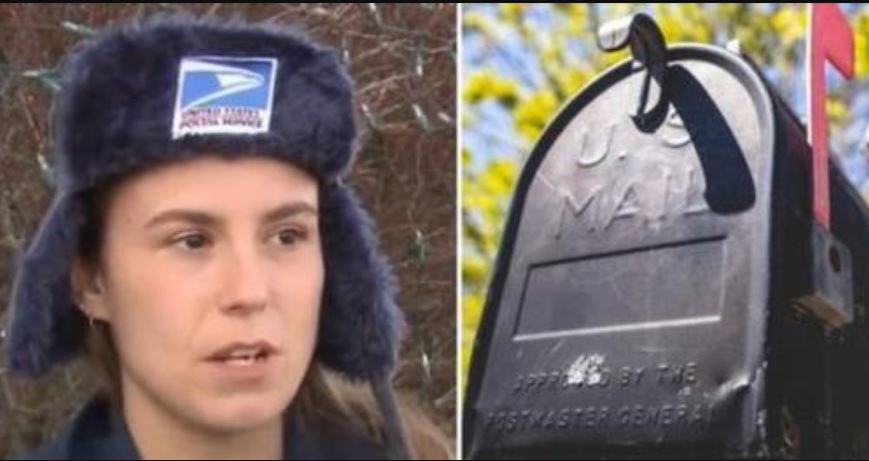 Kayla could tell something was wrong seeing the elderly woman’s mail piling up. Fortunately, she followed her gut and took action.
It’s noticing the little things that often allow big things to happen. For one US postal worker, that was exactly the case when she discovered that everything may not be ok for one of the homeowners on her route. It all started with noticing how her mail wasn’t being picked up anymore.

Kayla Berridge was walking her normal nine-mile route when she happened to notice that the mail was piling up at a particular residence.

Kayla had walked her route every day for weeks at a time. Over those weeks, you eventually get to know some of the people that live along your route! One elderly woman, in particular, had struck up a friendship with Kayla and the two would occasionally greet one another. What’s incredible is that those few conversations could have been life-saving.
Postal worker gets a bad feeling when senior doesn’t collect mail and ends up saving her life
After a few days of the mail piling up at this particular residence, Kayla started to get concerned.

The woman that lived at the home was in her 80s and generally took the mail in each day. For her not to be getting her letters either meant that she wasn’t home or something had happened. After the third day of piling mail, Kayla made the call to notify her postmaster.

The Postmaster then notified the local Newmarket Police and asked for a wellness check.

“On 01-27-22 the Newmarket Police received a call from the Postmaster requesting a welfare check on a resident of Newmarket. The United Stated Postal employee for this area, Kayla Berridge, was familiar with the elderly subject that resided at the home. Berridge noticed the mail had not been picked up in four days and the vehicle was still at the residence.”

A wellness check is essentially an in-person visit by law enforcement when someone is concerned about an individual’s potential mental or physical health. Now that the police were involved, they were going to be able to officially check on the elderly woman.

When the police knocked and didn’t receive an answer, they entered the home and found the senior trapped on the floor.

While walking, some household items had fallen on the woman and trapped her underneath. Spending three days stuck, the woman was in dire need of help. Thankfully, people like Kayla exist. In an interview with WMUR-TV, she said:

“I just had a gut feeling and I just wanted to make sure. Most people put a hold in if they’re not there, and when people pick up their mail every day you start to notice their habits.”

After police found the woman, she was taken to the hospital for treatment.

Kayla’s actions resulted in the woman getting the help she needed. She is currently being treated for dehydration and hypothermia, with officials claiming that Kayla’s call was right on time. You never know just how important a gut feeling can be – in this instance, it saved a life!